Last week we were thrilled to bring you the announcement of the release of the latest version of the PowerVR SDK Framework 5.0 and Tools Release 2 for 2017. This offers a number of exciting changes and promises to make life easier for any and all developers working with PowerVR GPUs. One of the major developments with this new release is happening in our SDK Framework and this post explains what’s new inside it.
Our previous 4.x Framework focused on providing a unified interface between OpenGL ES and Vulkan and serving as the basis for a cross-platform, cross API engine solution. This was successfully accomplished and that version will still be available for that purpose. However, we’ve been listening to your feedback and we could see that a major rework could improve things for developers even more.
First of all, we decided we should go back to basics. The Vulkan API is all about empowering the developer with more control, and our previous versions involved more hand-holding for the developer, which could potentially hinder Vulkan development.
Secondly, we felt that Vulkan on OpenGL ES just wasn’t right for an SDK, and was interfering with what the OpenGL ES SDK should have been – a learning aid for the OpenGL ES API.
So now we’ve put the power back in the hands of developers by stripping everything right back and leaving only useful utilities and wrappers. It does mean it’s not backwards compatible but you’ll be working with Vulkan rather than working with a framework based on Vulkan.
So – introducing the PowerVR SDK 5.0 Framework!

There are three parts to the new Framework – the common libraries, and libraries for Vulkan and OpenGL ES.

We’ll talk more about these libraries later, but first, we will take a look at the previous PowerVR SDK Framework version 4.x to provide some context to the changes we’ve made.

First, let’s look at how the previous version was structured:


As you can see, version 4.x of the Framework looks quite different to the new 5.0 version. There is no separation for OpenGL ES or Vulkan and the dependencies are more complex. Some libraries from 4.x have merged into others in 5.0, or have become a part of entirely new libraries in 5.0.

So what has changed? The Framework is now more focused on Vulkan only and has become more streamlined. It provides a wealth of new functionality, and helpers and has generally, been simplified.
PVRVk is essentially a standalone (no dependencies at all) C++ Vulkan wrapper with added smart pointer support, namespaces and strongly typed enums. They are all there to make the Vulkan developer’s life much easier. It is the slimmed down and much-improved version of the Vulkan-only parts of the 4.x PVRApi.
It has a lower level of abstraction compared to 4.x and has moved closer to the level of abstraction in frameworks such as Vulkan HPP, but still retains its PowerVR Framework roots of keeping things as easy as possible. Most things are now the developer’s responsibility just as with the Vulkan API, whereas in 4.x this was managed by the Framework.
Speaking of which, PVRUtilsVk is a new module that provides some helpers to simplify common tasks without requiring the user to write boilerplate code. These include regular tasks such as:

PVRUtilsVk depends on PVRVk, PVRCore and PVRAssets.
We now also provide our own vulkan_IMG.h header file. This is a modified version of the Khronos vulkan.h file, but uses strongly typed enums. We have also removed the global namespace function prototypes to declutter the global namespace as far as possible.
PVRVk has its own namespace – pvrvk:: as opposed to pvr:: which covers the rest of the Framework.

The OpenGL ES framework has been moved back toward its educational roots, as having a cross-API solution was hindering its educational purpose. This means that PVRGles does not exist anymore, and instead, the OpenGL ES version of PVRUtils (PVRUtilsGles) now offers everything needed. It provides tools that work directly on top of OpenGL ES rather than through intermediate abstractions.
The functions are dynamically loaded and they are all in gl namespace. DynamicEGL.h and DynamicGles.h are single headers for loading function pointers for EGL and OpenGL ES.Developers will be learning and enjoying full control, as raw OpenGL ES code will need to be used, for example gl::BindTexture().

Some parts have been merged into other modules and/or removed altogether, and the dependency chains are now much shorter. PVRCore remains the same as before, but common interfaces specific to the API have been cleaned up, such as IGraphicsContext, IPlatformContext, etc.
PVRShell now only depends on PVRCore so it is an independent platform abstraction, and as mentioned, now supports Wayland.
PVRNativeAPI and EngineUtils are merged into PVRUtilsGles and PVRUtilsVk, each one working natively on the corresponding abstraction. Both depend on PVRCore and PVRAssets. PVRUtilsVk also, not surprisingly, depends on PVRVk. Both libraries provide helpers for initialisation e.g. creating EGL/EAGL contexts, shaders, Vulkan swapchains etc and also for tasks such as uploading textures and so on.
PVRCamera remains the same as before and supports OpenGL ES only.

As you can see, we have made a lot of very significant changes to the SDK Framework, which can only offer a fantastic improvement and alternative to our previous 4.x version. If you need more information, our Framework documentation has been updated. If you need any further help, don’t forget about our support forums where our Support Team are ready to answer your questions. We hope you enjoy using this release as much as we did making it! 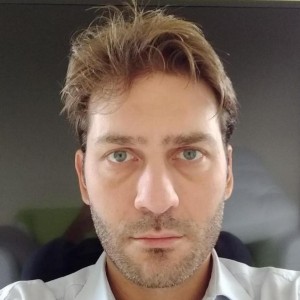 Gerry Raptis is an engineer. He always has been one, despite jumping a few times between fields (civil engineering to software engineering then information systems to graphics, C# and Java to C++ and graphics APIs). His main passions are physical simulations, including chiefly – but not limited to – graphics and physics. He is part of the DevTech team at Imagination Technologies, working as the lead engineer for the PowerVR SDK.